The Deportation of the Jews of Bad Kissingen

As far as that is possible, the Biographical Memorial Book at hand is meant to be a reminder of all the victims of Nazi tyranny who were born in Bad Kissingen or whose center of life the spa town was for a certain time. Therefore, not only the victims of deportations from Bad Kissingen in 1942 are mentioned but also the Jews of Bad Kissingen who were hauled into the extermination camps from other towns. Not so few Kissingen Jews who had moved to other towns, partly in the hope of being not so exposed to anti-Semitic hostilities in the anonymity of big cities, were deported from there. Even fleeing into neighboring countries didn’t grant any safety they could depend on. After the beginning of the war and the occupation of the Netherlands and France, quite a few of the Kissingen Jews who had emigrated (e.g. members of the families Adler, Bloemendal, Löwenthal and Rosenau) got into the machinery of Nazi annihilation there and became victims of the Shoa. Also included in the memorial list are Jewish citizens who died as a result of “Schutzhaft” (protective custody) (e.g. Louis Hofmann) or died after the violence of the November Pogrom (e.g. Hermann Holländer). And no doubt, people who committed suicide because they were reduced to despair in the face of the Nazi’s policy of exclusion such as Clara Frank and Town Councilor Otto Goldstein must also be called victims of Nazi violence.

When World War II started, there were nearly no chances for emigration for Jews in Germany. Nazi policies concerning Jews now aimed at recruiting Jews for forced labor and preparing the deportation and extermination of the Jews in Europe. This process called “Endlösung der Judenfrage” (final solution to the Jew question) was coordinated in detail at the Wannseekonferenz (Conference of Lake Wannsee/ Berlin) in January 1942.

After 1940, Jews were forced to move into so-called “Jews’ Houses” in order to make them “available” for deportation. In Bad Kissingen, the 41 Jews still living there in January 1942 had to live in seven houses: in Hemmerichstrasse 27 and 33, Hartmannstrasse 5, Maxstrasse 23a, Am Marktplatz 2, Untere Marktstrasse 12 and Erhardstrasse 8. In the house of Nanette Holländer in Maxstrasse on its own, six families had to live under one roof.

The deportation of these last Jews living in Bad Kissingen took place in April and May 1942. 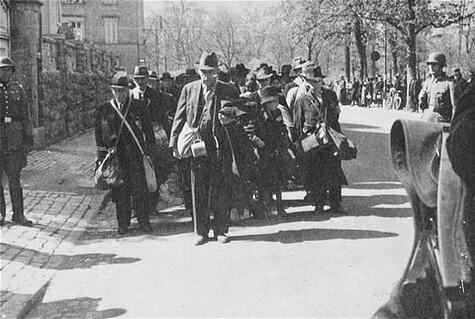 For a start, on April 24, 1942, 23 Jews of Bad Kissingen were taken to Würzburg in trains of the ‘Reichsbahn’ together with 21 Jewish men and women from the District of Bad Kissingen where they arrived at the Central Station at 7:20 A.M. From there, they and 800 other Main Franconian Jews were taken to the collection point in Platz’scher Garten and searched. The next morning, the 852 Jews were driven through the town to Aumühlbahnhof (Aumühl Station). There they had to get on a transport train and were taken to Krasnystaw Station near Izbica via Bamberg, Saalfeld, Glogau, Kalisch, Radom and Deblin where they arrived after three days on the train. From Krasnystaw Station they were driven on foot to the transit camp of Krasniczyn. In the following weeks, they died in these or other camps because of unspeakable living conditions or were murdered in the extermination camps in the region of Lublin. None of the 23 Jews deported from Bad Kissingen survived.

In May 1942, the forced relocation of the last Jews still living in Kissingen to Würzburg into the Jewish Home for Old and Sick People in Dürerstrasse 20 or another forced Jewish collective quarter called “Jüdisches Unterkunftshaus” (Jewish House of Accommodation”) in Bibrastrasse 6 took place. The Jews concerned were 18 men and women who had not been deported into the region of Krasnystaw on April 24 because of their old age. On September 10 and 23, 1942, the Kissingen Jews taken to Würzburg were deported to Theresienstadt on trains of the ‘Reichsbahn’. Some of them died there, the others were later deported to other extermination camps – particularly Auschwitz/ Oświęcim – and murdered there. Of the deported Jews, who had lived in Bad Kissingen for a longer period of time, only Rose Löwenthal and Emilie Schloß survived the atrocious conditions in Theresienstadt.

On May 1942, the Saale-Zeitung published the news “Bad Kissingen judenfrei” (Bad Kissingen free of Jews) in a communication of the Mayor that “on May 20, 1942, the last Jew had left Bad Kissingen”. The comment said that “one could only take note of this message with great happiness and congratulate the citizens of Bad Kissingen and the guests who enjoy visiting the spa on this felicitous event. In the future, nobody will be touched uncomfortably by looking at the “Judenstern” (Star of David).”

In what is now Garitz, a district of Bad Kissingen, there was one Jewish citizen still living at that time, Adolf Schönwiesner whose Jewish identity became known as late as 1943. He was deported to Auschwitz/ Oświęcim in 1944 and didn’t survive. The only Jewish citizen who was spared deportation and murder was the then 61-year-old Vally Ihl who had already converted to Catholicism in 1933. The reason for her being spared was that she lived in a “privilegierte Mischehe” (privileged miscegenation) with her non-Jewish husband Dr. Otto Ihl. This status protected her from being deported but only as long as her husband was alive. As Otto Ihl died after the war (1961), his wife survived Nazi despotism and died in Bad Kissingen on August 1, 1949.