The Emigration of the Jews of Bad Kissingen

In contrast to many other memorial books, we deliberately also considered those Jewish citizens in the data base who were able to escape annihilation by the Nazis by fleeing and emigration and survived. For often this rescue was accompanied by a painful farewell to home and family and combined with a difficult new start in a foreign environment. For many of the refugees, it was also combined with agonizing uncertainty concerning the fate of the family members left back whose demise they often had to watch powerless and helpless.

In the years of Nazi despotism, many Kissingen Jews decided to emigrate. The data base includes more than 270 people who had to leave Germany in those years. Emigration started immediately after the seizure of power by the Nazis and the beginning of the first boycott actions against Jewish businesses and repressions against Jewish citizens and facilities of their communities in 1933. The main aim of the advancing policies of social exclusion and deprivation of rights in the following years was to take away the Jewish citizens’ bases of existence and increase pressure on them to emigrate. The climax of emigration – like in all Germany – was reached after the November Pogrom and the “Aryanisation” of Jewish businesses in 1938 and 1939. As soon as World War II began, there were no chances for Jewish citizens left to escape the Shoa. The last emigrations of Kissingen Jews are documented for the year 1941. At the end of August 1941, the merchant Heinrich Stern and his wife Babette managed to emigrate to Cuba before the Nazi regime instituted a general ban on emigration for Jews in October 1941.

The decision for and date of an emigration was often dependent on the age, the financial means, possibly existing connections abroad, and also the interpretation of the political situation. Especially the young people and families with children decided rather early to leave Germany because they felt strong enough to make a new start in a foreign country and saw the menacing danger of the Hitler regime more clearly. For the elderly, weak or not so wealthy Jews it was much more difficult to take this step. In addition, many of them misinterpreted the situation because of their great patriotism and thought the repressions were only a passing phenomenon and surely things wouldn’t turn out that badly.

The fact that so many Kissingen Jews who tried to emigrate since the end of 1938 couldn’t do so was on the one hand because of the beginning of World War II but also due to the restrictive immigration policies of many countries.

This is especially true for Palestine as a destination for immigration. At the beginning of Nazi despotism, many Kissingen Jews went there but it got increasingly more difficult because of the restrictive immigration policy of the British Mandate Power towards the end of the 1930s.

Many other countries tried to deter refugees by bureaucratic immigration conditions – e.g. conditions concerning their wealth or guarantee declarations by citizens of the country refugees intended to go to. The tragic consequences of this policy can be found in the short biographies of Daniel and Anna Liebmann as well as Anni and Thekla Stern who desperately and in vain tried to be allowed to emigrate. 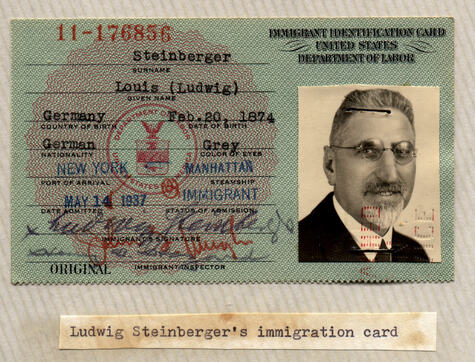 Fleeing abroad not always meant final salvation from annihilation. Some Kissingen Jews, e.g. members of the families Adler, Bloemendal, Löwenthal, and Rosenau, who often had fled to the Netherlands or France very early, were tragically deported and murdered after the German occupation of those countries.